It’s only taken 18 films to get to Black Panther, and in a lot of ways, this film is breaking new ground in the superhero genre, but in other ways, it still gets lost in the trappings of a comic book movie.

Black Panther is the first solo vehicle for the character after he was introduced in 2016’s Captain America: Civil War. This film takes place roughly a week after those events and finds T’Challa, A.K.A Black Panther, preparing for his coronation as the new king of Wakanda. 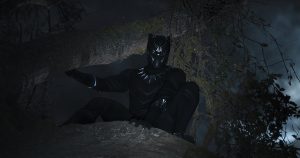 Now, let’s start with the biggest strength of this film, and that is the outstanding performance of Michael B. Jordan as Erik Killmonger. Marvel has always done a poor service to their villains, often leaving them undeveloped and underutilised, but that is not the case here.

Killmonger’s backstory stoke feelings of sympathy at times and, while I wasn’t agreeing with his overall philosophy, I can understand why he was lead down his path. Having your audience empathise with the villain and the hero is a tricky task, but screenwriters Ryan Coogler and Joe Robert Cole have done exceptionally well.

It would all be for nothing if Michael B. Jordan had not brought an intelligence and heart to the role. Jordan pulls off a fierce performance that’s deceptive and dangerous. His impassioned speeches throughout the film are perfect examples of his character’s complexity, and Jordan’s ability to deliver his dialogue had me completely engaged. 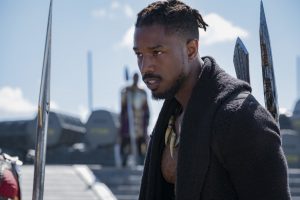 When it comes to the title character, Black Panther himself, I am afraid to admit that I didn’t find him nearly as compelling in this film as I did in Civil War. That’s through no fault of Chadwick Boseman, his acting is all on point. It’s just that I felt we didn’t get enough Black Panther moments to satisfy my craving started by Civil War.

Boseman does have a few moments here and there to bust out his acting chops but they were not really related to his Black Panther persona. Instead, they were more personal moments focused on his beginning as the king of Wakanda, and his misconceptions of what makes a worthy king. Sure, these moments are good and they would belong nicely in a royal drama, but I was sitting in that seat to experience comic book pages come to life, so those moments didn’t really hit for me.

The supporting cast are all enjoyable. Shuri (Letitia Wright) was the smartass tech girl, and was a lot of fun to watch. She was probably my favourite supporting cast member. Okoye’s (Danai Gurira) straight woman (comedy term, not sexuality, folks) routine was a nice counter balance to proceedings, as well as her conflict towards the end of the film. Andy Serkis’s Ulysses Klaue revealed in his villainy, producing a slew of laugh-out-loud moments. Martin Freeman was there….and that’s really all I thought of him in the film, while Nakia (Lupita Nyong’o) didn’t really break out of the half-developed romantic lead she was shoehorned into. That being said, all of the above-mentioned characters do get a cool action scene, so even the weaker roles get a little shot in the arm. 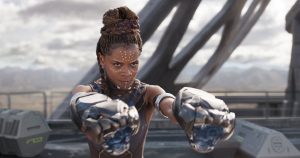 The writing and direction are on point, and so is the acting, for the most part. But where the film suffers (like most films these days) is in the editing room. Gone are the days when films stuck to a nice three-act structure that shows clear growth for the characters. Black Panther does have a three-act structure, it just needed tightening up. We also needed to see the aftermath of Killmonger’s plan once he succeeds, so that we get a sense of gravity of the trouble our characters are in. I would much rather have had our characters fight from within Wakanda than a half-hearted “Is the character dead or not” moment. Speaking of which, stop doing that shit. Audiences won’t believe for a second that the main character is dead, the troupe is worn out. Especially if that character is in the trailer for a future Marvel film screened before this film.

The CGI in the film works really hard in some places and not hard enough it others. The city of Wakanda is beautifully realised, it’s so close to the comics that my little nerd heart flutters every time there’s a panning shot. But then it’s let down with dodgy creature CGI or the final fight in the film. The green screen effect is woeful at times, and it pulled me right out of the viewing experience. The Superhero genre is plagued by this problem, and I don’t see a fix anytime soon.

But now onto some more good stuff. Black Panther is clearly a celebration of African culture not seen since Disney’s The Lion King. The score has distinct notes of African tribal music. The easy route would have been to cram it with rap music, but thankfully they did much better than that by offering a truly African musical composition.

The costume design should receive its fair share of praise in the future. It adheres to the traditional African aesthetic that the entire film is steeped in, and truly brings an amazing colour pallet to bear. It creates a very strong contrast to the oranges and blues of other films of the same genre (eg, Justice League).

Conclusion –
Overall Black Panther gets a 6.5 from me, and that’s not a disparaging score. The acting, direction and design are all on point. The dialogue is crafted expertly and is engaging. It’s just that the flow of the story structure is off and needed additional scenes to add gravitas to the characters plight. However, it’s going to be one of the better offerings of 2018. Trust me.