Welcome to the very first issue of Four Colour Tales! This idea as been years in the making, and I am proud to offer it up to you, The Internet, for your instant disapproval.

I met the artist Michael Parkes during a Dungeons & Dragons game in 2007, where we became good friends. I learned that Michael was an amateur artist and I, as an amateur writer, thought I could exploit him for profit. The first thing we considered collaborating on was a superhero comic. He asked me to write a generic superhero script, which I did.

After he told me it was very generic, all progress on the joint comic book died. It was during one of our constant chats concerning art that we started to conceive of characters based on us, or, more to the point, our inability to produce a comic. We started with Todd and Spencer, a writer and artist who just couldn’t get their shit together. They were good but the comic needed more, a third character to tie it all together.

I can’t remember who suggested it first, but we decided that a comic book store owner would be that third character. We thought that the character wanted to be an artist herself, but fell into financial hardship and essentially sold out on her dream to open a comic book store. As the series progresses, we’ll be introducing new characters based on the world I know, and with Tommy Dihn collaborating on story and editing, and Michael’s nihilistic view of the world, I’m sure we’ll have inspiration to last for years.

Now, with no further ado, I present, Issue 1: Writers Block. 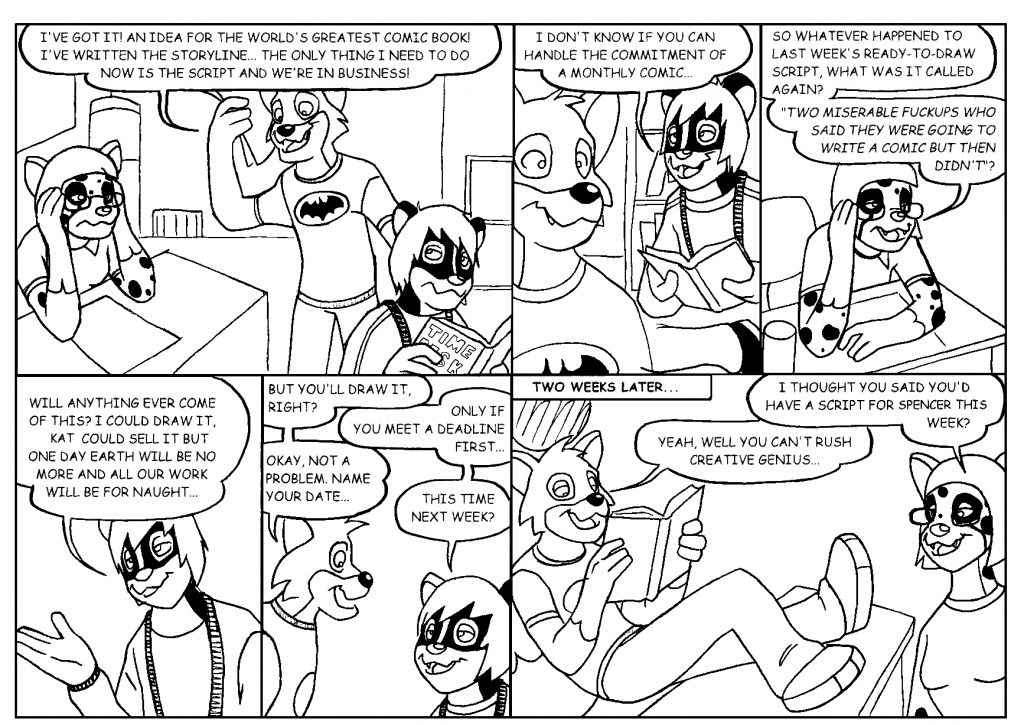 Concept Art – Kat, Todd and Spencer and an alternative design for Richie

Concept Art – Todd and Spencer in the early days.