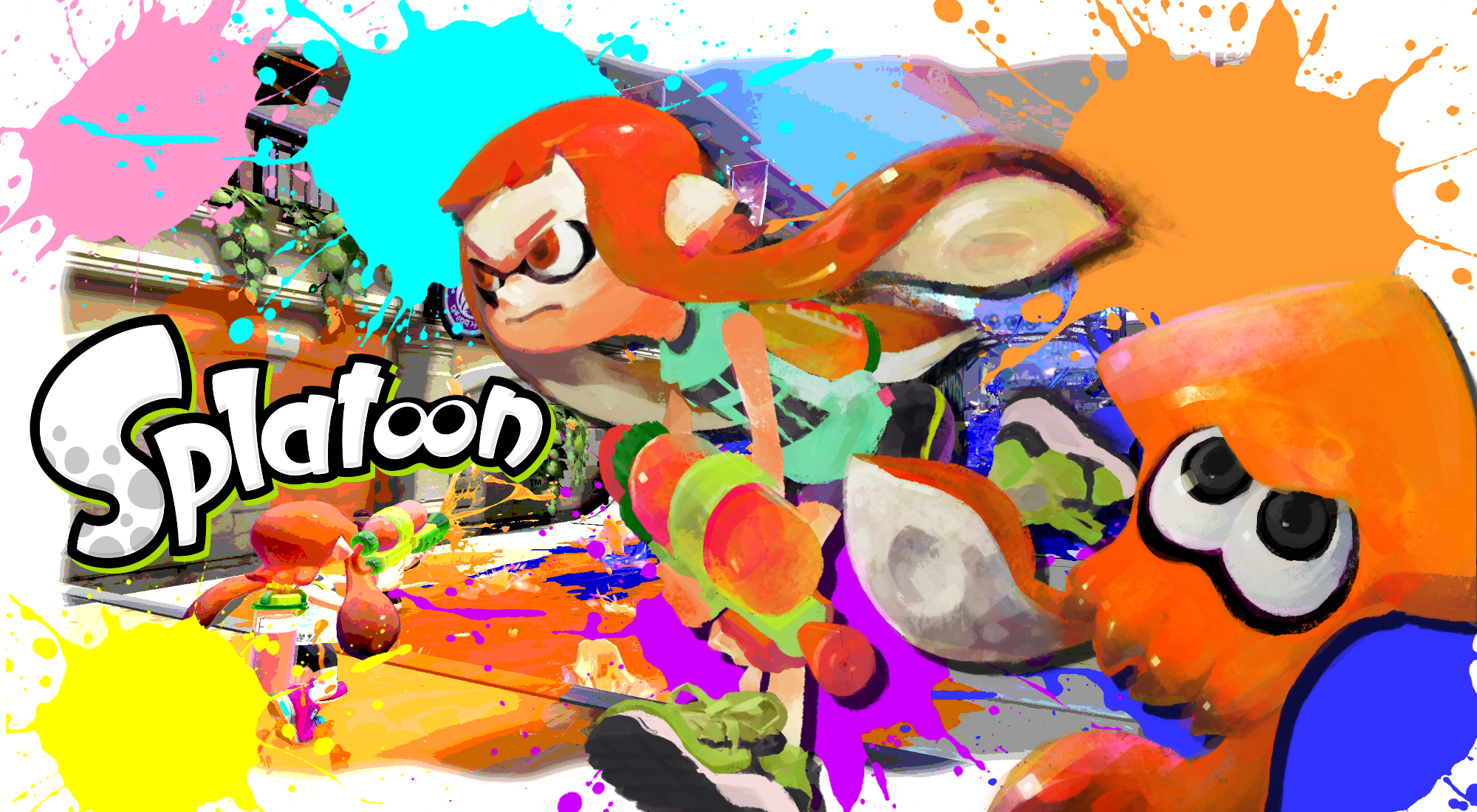 Splatoon is an odd game and I don’t base that entirely on it’s fixation with cephalopods and ink splatter aesthetics. The game itself, coming out in the current climate is what is really strange and a lot of people were very exited about it’s release and thrilled at it’s genuine quality when it finally came out. Now Matt has stated before that he wishes people would just shut up about this game which I suppose is fair enough. However, there is a lot going on here that’s making Splatoon such a talking point and much of it has to do with just how odd the game is.

The game is a competitive third person shooter that has very little emphasis on shooting other people. It’s still an element but at the end of the day, your kill/death ratio matters naught if you’ve been  spreading ink around the level like a madman. This mechanic is genius in its own right for a lot of reasons but I think why so many people have latched onto Splatoon the way they have is simply that it is feels different from every other competitive shooter out there. The people writing about games have been in the industry for a long time and shooters have been a stagnant force for a while now. So it’s no surprise that many of the blogs are talking about it, it’s a breath of fresh air in a saturated bog of a genre.

Now the fact that it was Nintendo that made Splatoon might not be that surprising given it’s cutesy kid friendly aesthetic but it isn’t that much of a no-brainer either. I remember throughout the last console generation Nintendo were generally pegged to be as uncreative as other Triple A publishers. Cries of when will there be a new IP? Sounded for years. Now I’ve never taken much claim in these remarks since Nintendo innovate in different ways than most expect. Usually — and this is the reason their franchises continue to be popular — Nintendo will take an established property and experiment with it. How would a Mario game function in space? What if Kirby is made of yarn? So the interesting thing with Splatoon was that they themselves decided that a new IP was better for this mechanic than an established property.

There are also some very non-Nintendo things going on in the game too. For instance the fact that online is the major focus is huge and not only that but it works really well too. You’re playing against players from all over the world potentially yet there’s no lag while playing. You get into a matchmaking lobby and are playing in seconds sometimes maybe a minute or so at the most. But leaving the multiplayer aside, you actually get dissed for being bad at the game… Well sort of. After a certain point this doesn’t happen but, before you reach level 4 you can’t buy gear. So the shop keepers will tell you how not “fresh” you are and tell you to play more of the game. Which is so counter to Nintendo’s general philosophy of “Oh you failed at this a few of times, here’s an item that will make it so you can’t die anymore to use if you want”.

So yeah there’s quite a bit there that makes Splatoon standout even amongst Nintendo’s stable of IPs but I think the other big reason why Splatoon is so talked about is because this is just another example of Nintendo essentially screwing around with pre-established conventions.

Take the 2-D fighter as an example or even a 3-D one. The mechanics for all of these games is to fight a singular opponent within a confined box. Your goal is always to take their health down to zero. Nintendo saw that foundation and thought, “well what if the goal was different, how would that change the way a fighter is played?”. “What if the goal of a fighter was to simply knock the opponent out of that box?”. What makes Smash Brothers what it is is owed to this rethinking of what makes a fighter a fighter and the series remains a talking point whenever a new iteration is released.

Splatoon follows on from that philosophy and like Smash, like Super Mario Galaxy, like Portal(See Nintendo aren’t the only ones). The game stands out among its peers as a game that was made by a Triple A publisher but chose not to mimic what set the ground work but to purposefully take that foundation and take it somewhere new. In doing so these games mechanically play like their predecessors but feel different which is something we need a lot more of in the Triple A space and people are rightfully praising it.

Oh, it probably doesn’t hurt that the game itself is well made and fun to play.