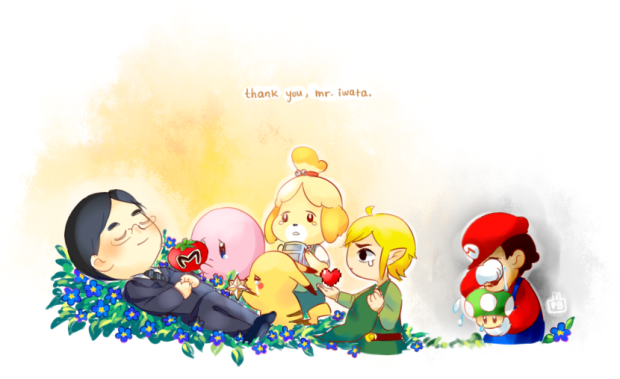 This post is really hard for me to write. The games Iwata helped develop didn’t form my childhood,  I never met with him in person or anything close and yet I find myself feeling a great deal of sadness at the fact that he will no longer be around. The more I dwell on it the more I settle on two key things that define that feeling of loss. The first is that Satoru Iwata was a remarkable human being.

I’ll let some of his achievements speak for this fact. He originally joined HAL laboratory as a lowly programmer after graduating university. In 1993 he was promoted to president while the company was about to go bankrupt. He managed to turn things around and HAL are thankfully still around making games. Iwata would achieve a similar feet but on a much larger scale when he would helm Nintendo itself in 2002.

If anyone remembers that far back, 2002 was before the launch of the Wii and even the original DS, back when the Gamecube was Nintendo’s runner in the console race and was around the time where Nintendo was for the first time ever operating at a loss. Most companies in a similar position turn to the numbers and do the “business” of cutting staff and making the safe, guaranteed plays. Not Iwata. He pushed Nintendo into making a new hand held and home console with brand new control schemes and they were ridiculed by the pundits. Despite conventional wisdom at the time…Well we all know how it all turned out…

It takes real guts to trust in a vision like that and the Nintendo we have today as a result is much more personable and much less like the monolithic corporations that it competes with. Ever since Iwata took charge, Nintendo always had a personal presence at trade shows and the executives released video press conferences where they can goof off and do mock battles, skits or just look at a bunch of bananas for no reason. Think of any other executive that would do the same thing and you begin to see why he was such a unique presence in the industry and why he leaves such a vacuum in his wake.

The second factor is a much more personal thing I suppose but is probably the primary reason I feel a sense of loss and it’s that his philosophies and approach to gaming are very much like my own. A lot of these kinds of things can be encapsulated by quotes from Iwata during his tenure as president.

“I also know that some employers publicize their restructuring plan to improve their financial performance by letting a number of their employees go, but at Nintendo, employees make valuable contributions in their respective fields, so I believe that laying off a group of employees will not help to strengthen Nintendo’s business in the long run

This isn’t getting much play on the social media but I think it perfectly illustrates Iwata’s forward thinking, leadership and care for those making games under him. Another thing that people don’t remember too often was that he took a massive pay cut in order to not lay off staff. Again, can you think of a president of a multinational that would do the same thing?

“Above all, video games are meant to just be one thing: Fun for everyone.”

This quote although a little broader than I’d prescribe to more or less mirrors my own thoughts of game design. The game first and foremost needs to be fun to play, otherwise what is the point in making the thing a game.

“On my business card, I am a corporate president. In my mind, I am a game developer. But in my heart, I am a gamer.”

This last quote is the perfect representation of Iwata. The president stuff I’ve covered but the way he says it, it’s something he acknowledges about himself but he doesn’t let it define him. The second line illustrates where he came from and the approach he has toward development and developers. As president he tried to shine the light on the developers themselves and how the games they made came to be. The entire Iwata asks series is dedicated to that goal and if you watch them you get a sense that he truly enjoyed developing games. The last line of course speaks to who he is fundamentally before he became the other two and is the driving force behind all of the decisions he made as president and former developer.

Satoru Iwata is a man who came from the trenches and understands all of the things it takes to make a game but for him the end result of making fun games was the most important goal. So in the end I guess I feel that sense of loss primarily because he was someone I admired and also that I don’t know if I will see another person like him in the industry again. He was someone who stuck to his vision, gave a shit about gamers and developers and just loved making games… And bananas too I guess…